Are You Practicing Vaping Etiquette?

Studies show that one in 20 Americans aged 35 and younger are currently using e-cigarettes and its other variants in 2018. This statistic totals to a rough estimate of 10.8 million American adults who vape. By 2023, the vaping industry will exceed $43 billion due to its growing number of patrons.

An Opportunity to Act Accordingly

This sounds like a wonderful business opportunity if you want to explore the profitability of a franchise on e-cigarettes. But for those who are not into the activity, it may not be such a welcome development. Although vaping is less invasive than traditional smoking, nonvapers may not appreciate a cloud of smoke that’s heavily scented. Some people may have a sensitivity to strong scents, which may trigger an allergic reaction.

Whether you’ve taken up vaping to wean off tobacco smoking or simply enjoy a new way to relax, it’s important to consider other people as you vape in public.

What should and shouldn’t you do when vaping?

Vape smoke isn’t as harmful as tobacco smoke, especially since the latter can emit about 7,000 chemicals when burned. But researchers have yet to conclude the absolute safety of e-cigs, and some may still be harmful to children and pets. Some e-juices may still contain nicotine, which isn’t good for kids and animals.

With that mind, you’ll want to practice care when in a public place filled with families and their pets, like a park.

But should you just smoke indoors? 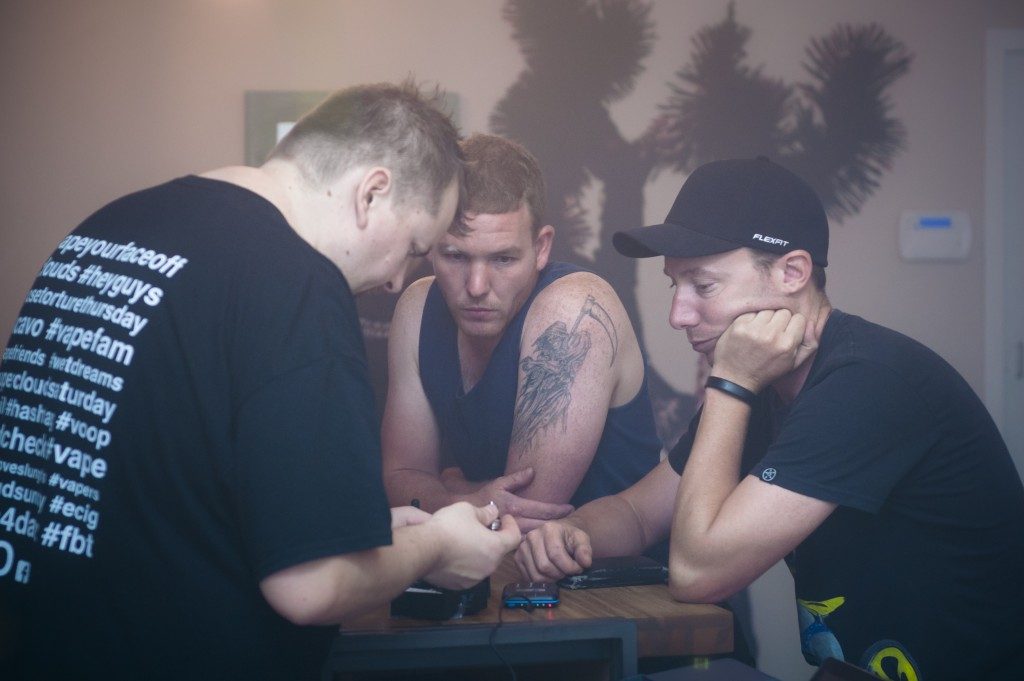 You can, but avoid doing so in small, enclosed spaces. The nicotine from the vapor might stick onto the walls, ceiling, and furniture. This chemical residue might become toxic and harmful over time. Additionally, vape smoke can climb into vents and seep into other rooms, potentially making others ill.

Some places may ban tobacco smoke but allow vape smoke. But before you bring out your kit, begin to choose your e-juice, and turn on your e-cig, ask for permission. It only shows how considerate vapers are, which can sway nonvapers to accept the practice even more.

Don’t vape in restaurants. Most dining establishments will have a “no smoking” policy. Respect that policy because it prevents the sometimes strong scent from vaping to overwhelm the dishes diners eat. Some diners may also be put off by the thick cloud of smoke hovering over them as they try to enjoy their lunch or dinner.

What’s in a Vape?

Vaping is the act of inhaling vapors coming out of an e-cigarette or a similar vape device. Like traditional smokers, vapers inhale and exhale smoke containing nicotine and other chemicals that may inconvenience others.

Vaping offers you, and others, the chance to get off the unhealthy habit of tobacco smoking. The many different flavors and accessories may also turn this practice into an enjoyable one. And because many others have taken to smoking electronic cigarettes, you’ll find plenty of public spaces giving way to vapers. If you’re one of many, be considerate and practice key behaviors that put vaping in a good light.